Where in the World is…

Mpamba?
Very good question if I do say so myself. Below is the community profile that I have compiled for Engineers Without Borders Canada, and I thought I would share it with you.
AFRICANADA Village Profile: Mpamba, northern Malawi 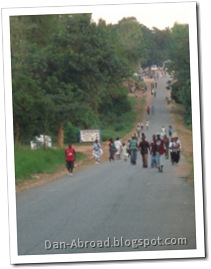 Mpamba Trading Centre falls into Traditional Authority (TA) Timbiri of Nkhata Bay District. It is approximately half way between Nkhata Bay Boma (the district capitol) to the East and Mzuzu, the largest city in the Northern Region to the West. Along the M5 (the highway connecting these two cities) it is the largest population center. The highway is paved, and maintained by the District Assembly (regional government), the other roads around town are packed dirt and maintained by local village heads. With a population of 35,987[1] TA Timbiri is the third largest TA in the district after TA Kabunduli, which covers the largest geographical area, and TA Mkumbira which covers the Boma. The highest proportion of this population is concentrated around Mpamba.
A significant part of the economy of the town is servicing buses traveling along the highway, providing snacks such as bananas, oranges, mandasi (Malawian equivalent of a Tim-Bit) and cold drinks. I traveled into town from Mzuzu on one of these buses. Despite the (relatively) large volume of traffic through the town, the primary source of income for the communities surrounding Mpamba is agriculture. Currently it is the dry season and most people are growing various varieties of cassava and potato. Considering it is the “dry” season it rains rather frequently, about twice a week, usually in the mornings, and has remained rather temperate at other times. Northern Malawi experiences a mild winter where some agriculture is still possible. The rainy season occurs between November and April. The heavy rains cause most dirt roads to wash out limiting access to the more remote villages. Additionally, a number of water points are located in areas that periodically flood during the rainy season, creating a pathway to the aquifer for pathogens and rendering them unsafe. Despite this many communities continue to use them instead of walking the extra distance to a neighbouring water point. 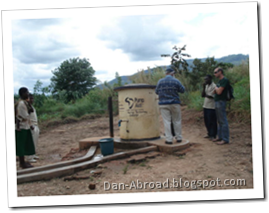 There is a significant World Vision presence in the area, one of their offices being only just down the road from my home, across from the Junior School. Additionally shallow wells and boreholes have been installed around the area by the Marion Medical Mission, who also trains area mechanics. Pump Aid is also another significant player in the area and have installed numerous “Elephant Pumps” (pictured left) around the TA. 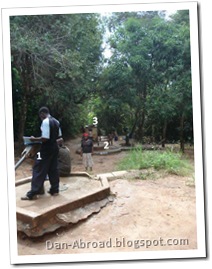 This redundancy (all three organizations have water programs) has led to some areas in and around Mpamba (and the rest of the TA, according to the preliminary results of a survey we've been doing) being left without access to a protected drinking water source, while others are over covered (see photo of 3 wells, all within about 10 meters of each other). Currently World Vision is working on a project to rehabilitate a gravity fed water scheme which supplies water to 13 taps around Mpamba, as of now none of the taps are functional.
Daniel
[1] According to the Nkhata Bay Water Atlas (September 2009)
Posted by Dan at 7:35 AM