Anatomy of a Shallow Well Part 3 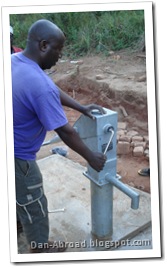 The pump is one of the most interesting parts of a well or borehole. It’s definitely the most complicated, the most likely to break and sometimes the most controversial (to learn more see EWB Volunteer Owen Scott’s series on the Playpump, as well as a new Frontline documentary). It’s also the part which most frequently breaks down and renders a pump non functional. It’s these breakdowns which in theory should create a financial driver for people who have been trained to repair pumps, and for small grocery owners to stock replacement parts for sale, this unfortunately is only sometimes the case. 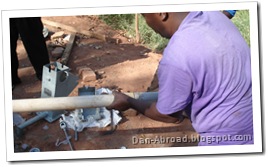 When we last left our well, it had been covered with a concrete pedestal and apron to protect it from contamination, and the “civil works” and washing slab had been built from bricks and concrete. We arrived late in the afternoon in a minibus carrying all the parts required for the Afridev hand-pump and right away set to work. 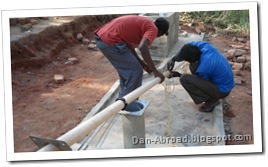 A “foot valve” assembly in the bottom cylinder  will keep water inside the pipe that the hand-pump pumps through. This assembly is cemented with PVC solvent cement and a small fire to the PVC pipe. Then, pipe centrizers are slid onto the pipe. These guide the rope holding on to the bottom cylinder, in case it should come unglued. This is slid down the well, and the pipe is measured for length, ensuring that the foot valve is at least one foot above the bottom of the well to stop it from being clogged. 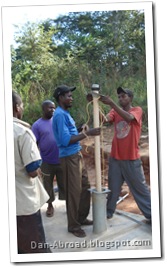 An assembly to hold the pipe in place and centered is cemented to the pipe and it is slid back down the well. The ropes are tightened, and the assembly is bolted to the riser pipe. On top of this the pump casing is also bolted, and the Afridev starts to take shape. Now the plunger, and plunger rod are attached to two more rods and descend down the well. The plunger is a white plastic piece (similar to a foot valve) with a bobbin that creates a valve and is used to raise the water level up the PVC pipe. 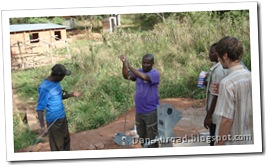 The rod is then descended down the well, attaching to interlocking rods as necessary to reach the bottom of the pipe. The top rod is measured to length and marked, then the whole thing comes back out of the well to cut the rod to length. 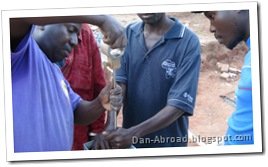 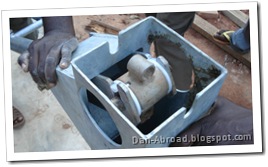 Now, the pump is functioning fine, and all that remains to do is  re-attach the cover, and get a bucket. 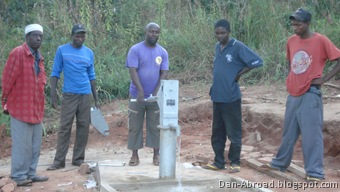